The Great Garage Clean Out 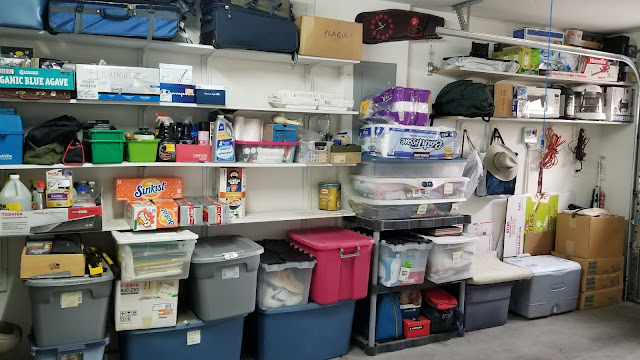 Our garage ends up as the catch-all for all of the stuff we don't want, empty boxes, new purchases, stuff to give away, etc.  Once a year we take a day to clean out and reorganize the garage in order to keep the junk level under control (and ensure that we can still fit the car in there!).

It's a cooperative effort.  I would like to get rid of nearly everything while hubby still has boxes of VCR tapes and a VCR...which I'm pretty sure he will never ever use but he still wants to keep this stuff...smh.  After several hours of work we were able to: pack up and send one big box of stuff to the Philippines, fill half the van with stuff we then donated to the Goodwill, throw away a bunch of empty boxes and junk we no longer need and isn't worth donating, mail a big box of stuff to the grandkids in Florida, and tidy up and organize the stuff we do want to keep.

If we would have had a lot of big valuable stuff we didn't want we may have held a garage sale or tried to sell it via Craigslist but that wasn't the case.  Anyway, we now have a neat and tidy garage and some of the kids will get a nice surprise in the mail and I am happy to put this project behind us until next year!
Posted by Cash Only Living at 5:47 PM