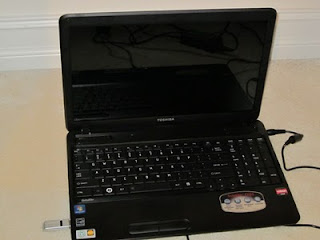 Since we have decided to extend our stay with the SIL for a few more months, I was feeling pretty sorry for hubby who had left his bigger laptop behind in the storage unit in favor of bringing his easy-to-carry netbook with him. Granted the netbook is great for traveling because it is so small, but on the other hand, hubby streams his TV shows from Asia every day and he could barely see the people's faces on his tiny netbook.
So off we went to Staples and bought him a basic yet fully functional Toshiba computer for a grand total of $399. The SIL went shopping with us and was properly mortified that we would buy a super cheap computer. She even carted us over to the Apple store to try to convince us that a MacBook Pro was the way to go. Now, a few years ago we would have clamoured for the coveted Apple computer and quickly swiped the credit card to the tune of $1500 plus then worried about how to pay the bill for the next dozen months or so but these days we are working on a cash-only basis and we have learned that if we spend all of our cash, we won't have any more to spend on other things that may come up. Here's what we did:


The moral of the story is that while it is nice to go top of the line, it isn't necessary. If he was a hard-core gamer/programmer/coder then we may have chosen differently but when you look at what you are buying, what you actually need the item for, and the price for what you are getting, you can be perfectly happy with a basic item that gets the job done.

And some side notes:

Posted by Cash Only Living at 4:09 PM