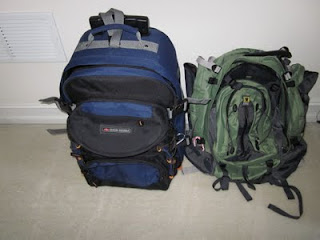 We are gathering up our stuff and getting ready to hit the road again. Since we have been here in Atlanta for a little over four months, hubby has acquired quite a few things (he is the pack rat in the family) but I think I actually have less than what I arrived with (I am the minimalist...plus I have sent three boxes of clothes and shoes to my niece in the time we have been here). So I thought I would list everything I have with me. Here's everything I am packing up:


And that's all. Besides the few things we are using here (towels, washcloths, TV, bedding, a place to do laundry and a place to cook and eat) that is literally all I need to survive...not much once you really look at the list. Obviously in your own home you won't have such a minimal number of possessions but if you really need to cut back (ie: stop shopping and/or sell a lot of the stuff that you own) it is good to know that to actually live on a day to day basis, you really don't need much stuff.

Posted by Cash Only Living at 1:26 PM