We Made it to the Philippines! 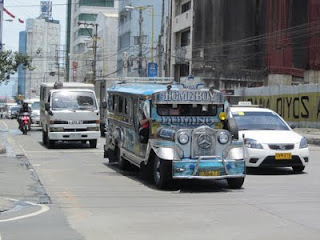 We landed last night in the Philippines and now the fun begins!  Actually now I need a nap...the flight was 16 torturous hours long (the worst part about Asian travel is actually getting here because it takes so long!) but I am happy to report that the weather is beautiful--humid and warm but not too hot.  The food so far is great (we like to eat at a small Chinese restaurant in Makati Manila) and the hotel is pretty nice but relatively cheap for being in a major city (about $45 a night).
Hubby's cousin picked us up at the airport last night and took us to our hotel and it just so happened that they had karaoke going in the hotel's night club so the cousin jumped up and sang and he is awesome (he is the lead singer in a famous band in the Philippines so people were pretty shocked to see him singing there).  The worst thing about Manila? Trying to cross the street without getting run over.  It isn't for the faint of heart and since the traffic never actually stops you just need to step off the curb and walk and hope people stop for you!
I'm trying to keep track of all of our expense for the trip so I will be able to give you a complete financial run down at the end (note that as soon as you step off the plane, hubby starts tipping people so that part may be hard to quantify).  So far he has tipped: the guy that opens the door for us at the hotel, the three people who waited on us at the hotel night club, the guy that brought up extra towels, the guy that brought our luggage to the room, the waiter in the restaurant, an old woman that was begging in the street...I guess this is all part of big city life but for the past few months we have been, more or less, small town people where you don't have to tip everyone you see!.
Posted by Cash Only Living at 9:37 PM