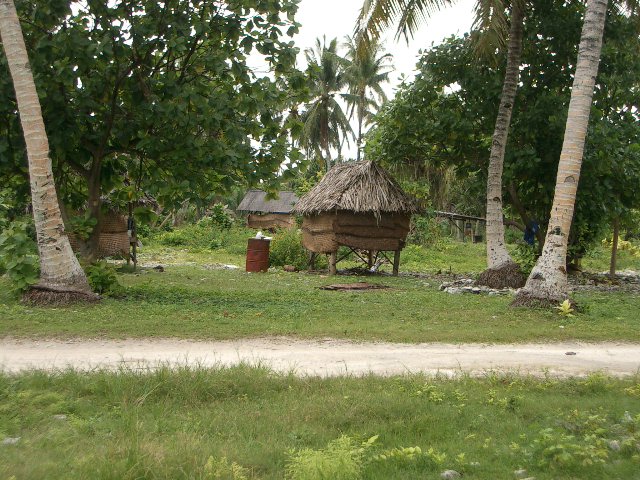 14 years ago we went to Fanning Island which is a part of Kiribati.  It's a couple day cruise away from Hawaii in the south Pacific and is one of the remotest palaces on earth.  It was a one day stop on a long cruise we took and, like I often do when we go anywhere new, we stopped by the clinic on the island (not one of these huts but it did have a dirt floor and was quite rudimentary).  I talked to a nurse at the clinic and sent her medical supplies when we got back home until the cruise ships no longer went there so there was no way to get packages to the island after that (we could send packages to the cruise ship that had remote places on their itinerary and they would deliver the package the next time they made a stop at the island).

Fast forward to a couple days ago when I got a Facebook message from a girl asking if I remembered her mom who was the nurse I had met on the island.  I was pretty surprised and thrilled to #1, learn the lady still remembered me and told her daughter about me, #2, find out the lady was retired and had moved to higher ground in the island chain although her daughter still lives on Fanning Island (the entire country could soon be under water due to climate change), and #3, find out that they have access to the internet in a place that before didn't even have electricity.  Also number 4...I think you can find anyone through Facebook these days!  It was a nice surprise and we have been messaging everyday since she first contacted me!

In other news, I still haven't received unemployment yet and this has now become a lawsuit, I was hoping the pharmacy would reopen soon on base so we could get all of hubby's prescriptions for free but that doesn't look like it will happen with the rise in covid cases that is currently happening (so I will pay to order them online), hubby's VA claim is still in limbo due to the company I am dealing with to get this done, and finally, a friend emailed me from Japan and asked if I was OK and if she could do anything to help me (seems their news makes the US look like a war zone with the pandemic and violent protests and who knows what other news they are getting about us...yikes!).

We have no plans for the 4th of July and our neighbors go all out with fireworks (they literally spend thousands of dollars on illegal fireworks and put on shows that rival the commercial fireworks shows!). so we will probably just stay home and see what the neighbors do with fireworks this year.

I hope you all have a wonderful 4th of July in this new and weird world we are living in!
Posted by Cash Only Living at 11:14 AM