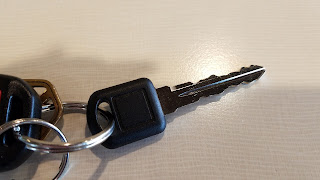 A while back hubby lost his keys.  It would have been no big deal, except for the time it would take to get some keys copied, but one of the keys he lost was to his van and this key is one of those electronic-transponder keys (read very expensive to replace).  I called a car locksmith and the verdict was $180 for them to make a new car key.  Ugh.

But this being 2017, I went hunting (online, not like really hunting) for a DIY way to replace the key mostly to save money because $180 for a key is ridiculous.  I found several websites that said it was totally possible to make your own transponder car key so I: