Selling a Table and Chairs 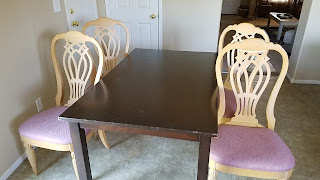 This is our old table and chairs.  They were given to us when we first moved to Las Vegas and as you can see, they don't even match.  A nice table cloth kind of covered up the fact that the table and chairs didn't match but when it came time to get a new dining set I went about trying to sell this set...and learned a Craigslist lesson.

First I listed the table and chairs together for $100.  Not a single person called about it.  Then I lowered the price to $75 for the set and again, not a single call.  So I got the bright idea to list them separately and you know what?  They sold immediately!  Not only did they sell quickly but they sold for nearly the initial price that I wanted--the table sold for $40 and the chairs for $50.  Reselling people probably would have probably already thought about this but it was kind of an eye-opening idea for me.
Posted by Cash Only Living at 5:59 PM